After a really productive programming meeting, we are ready with our second draft of the 2020 Summer Schedule. You can have a look at it here.

Here are some the of key takeaways and rationales for changes -

Please go through our schedule and give any and all views you might have. Josh and I are still learning our way around

Please please please, anything other than F9 on that double (Saint Maud? Promising Young Woman?). The last one (and I’ve heard rumourings about how you can explain this away because it was “too old” – it wasn’t because it was 3 days later than you have it here) got 14 people, the one before that got 9 etc.

I love it! And I love all the points you made above they all sounds good. I definitely think it’s a good idea that The True History of the Kelly Gang has made it into the schedule. Great job guys!

On the whole there is much love from me though <3

OMG Elena now I look like I’m copying you!!

Hehe just too much love

Forgot one thing! Misbehaviour has been moved to Thursday and Bacurau to Monday by request. Sorry!

This seems like a fair change, Aryan was sceptical about a double too. I’d be more inclined to make Promising Young Woman a double out of those two

Also, I believe there are nice (well you’d hope anyway – Kermode keeps going around introducing it) 35mm prints of the Elephant Man knocking around still if you’re interested and are able to do a bit of shifting to have a slightly larger gap (even just swapping with Lady on Fire or smth). Partly selfish because I’m a big fan of black and white 35mm.

And yes I know there’s a 4K restoration too!

Thanks a lot for the feedback everyone! We have an updated draft with the requested changes for the dates. Please go through it and let us know what you think - 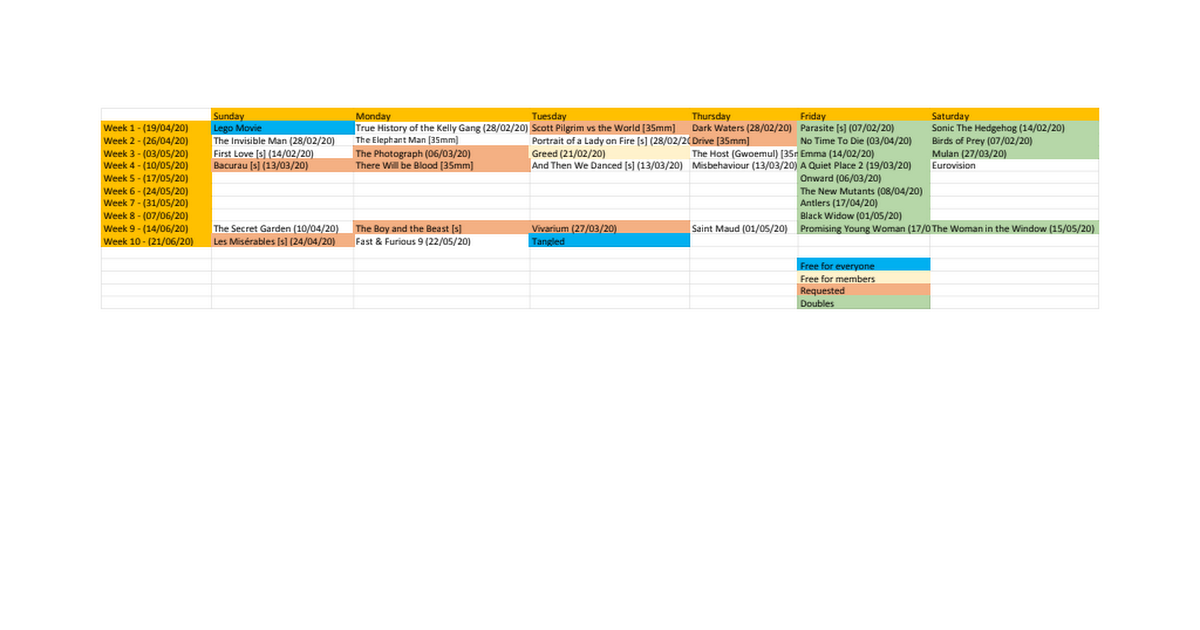 This looks so great guys!!! My only points of concern is Fast & Furious being on the schedule (if you look at attendance for the past few F&F films it hasn’t been great and it is not a film with any cinematic worth). Other than that I think it’s pretty perfect – I love the selection of 35mm and appreciate the amount of foreign cinema on, too.

I’ll also always pitch EMA [s] and Eternal Sunshine of a Spotless Mind, also I just found out Colour Out of Space (2019) is a thing and I think it would look ridiculous yet magnificent on our big screen???